The expression “self-made man” has been around for many years. The term was born to popular culture on February 2, 1832 on the floor of the United States Senate when Henry Clay used it to describe individuals whose success came from within, owing little or nothing to birth, relationships, inherited wealth, or access to the best schooling. After meeting Salvatore Cannizzaro, his story may be the one you think of first when the notion of self-made is again heard. But it’s a story of a man who was not entirely without assistance. His help came from the ocean, his love for boats, and a deep desire to achieve.

A first-generation youngest son, born to immigrant parents from Sicily, Sal lost his dad when he was only three-years-old. His mother raised him and his younger brother on her own in New York, and Sal speaks of the challenges his family faced as having been “underprivileged”. Because times were difficult, Sal learned early that money and work were a priority. In middle school he joined a program allowing him to learn the trade of printing. While other kids were out playing ball, Sal was finding ways to make things happen.

One of the ways Sal discovered to make things happen came from an old fishing pole. Having found it while riding his bike, Sal used the encountered treasure to fish for dinner, taking his prizes from the sea home to his mother. But the young boy would take so much more from his afternoons watching the boats glide under the Verrazzano Bridge. A deep desire, a dream, a goal formed that would lead to uncommon success.

“I used to sit there fishing as a kid, watching all the beautiful boats,” shared Sal. “I promised myself one day I would have a luxury boat and sail under the Verrazzano too. The day I achieved my vision was amazing. I took our first boat, the Lady Diana named for my daughter, and I made my dream come true.”

Today, Sal and his wife of 38-years, Debbie, live in a home in Rumson on the banks of the Navesink. His private dock leads to their latest boat, The Blue Moon, and a lifetime of dreams fulfilled.

Sal is the founder of both Immediate Care Medical Walk-In Centers and SFC Enterprises, Inc., a real estate development company. But his path as an entrepreneur started much earlier. At the age of 24, after having worked for several printing companies, Sal started his own print shop. At first printing whatever was needed, be it fliers or invitations, he soon discovered an unmet need in the market. Generic drug makers, known as private labels, were looking for companies to print their packaging. Most other operations didn’t want to take on these smaller jobs, but Sal willingly did and became the go-to label and packaging manufacturer.

His company, Innovative Folding Carton Co., which is still operating today as Multi Packaging Solutions (MPS), sustained much growth and several relocations. When Innovative purchased a building in South Plainfield, Sal managed the complete renovation and subsequent 35,000 square foot expansion of the building, ultimately creating a showcase 100,000 square foot, state-of-the-art manufacturing facility. The company grew to be a profitable, highly-respected manufacturer that employed 270 people. In 1998, Sal sold the company to a venture capital firm and set off on a new adventure.

Knowing he has a knack for all things design-related, and not wanting to be retired at too young of an age, Sal started SFC Enterprises believing he could continue to develop real estate successfully. Today he runs the business with his son, Frank.

“My next goal is to take my vision, along with my son, Frank, and continue to watch it flourish,” said Sal. “We can bring it to reality together, so I can then spend more time helping others in the community, traveling with my wife, fishing, and boating.”

Sal saw another need in the marketplace and set out to make something new happen yet again. Having the ability to build commercial and medical offices, in 2012 Sal took the urgent care concept and combined it with primary care in the same location. Now he has a group of nine urgent care centers throughout New Jersey.

“We are unique in the fact that we can design and build the medical space for these practices and are able to get to market quicker and more economically,” said Sal. “On a more personal level, I believe what sets me apart from others is the ability to bring an approach filled with innovative ideas, passion, and charisma to work every day not only for myself, but for my employees, helping to create a unique family environment in the workplace.”

Immediate Care Medical Walk-In Centers have been fulfilling another dream of Sal’s for the past five years by giving back to kids in the local community. (See below). When asked what project he’ll tackle next, Sal is quick to reply that he looks forward to more time with Debbie on his boat, since he’s been promising her for years that he’ll retire. However, he’s also quick to mention some ideas he has to help children and the elderly. It will be interesting to see what Sal makes happen next. 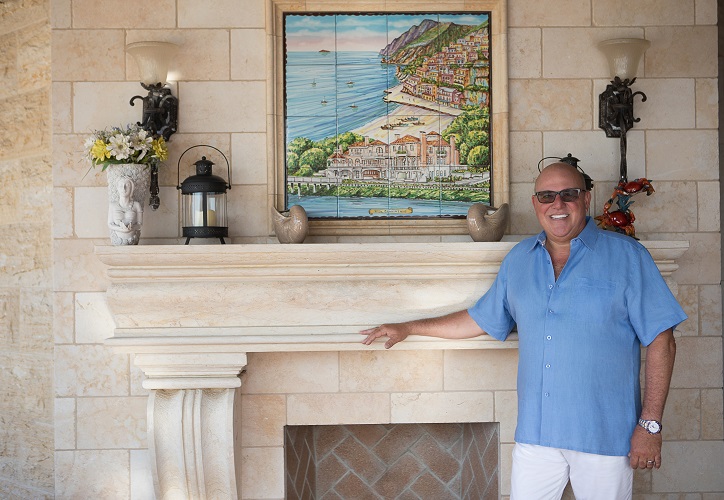 Name: Salvatore F. Cannizzaro, is married to Debbie. They have two grown children: Frank and Diana. Frank is the Vice President of Construction for SFC Enterprises, Inc. Diana is a Team Sports Reporter at Philadelphia Soul.

Best life tip to share: “Be humble, listen, always stay positive, and don’t take no for an answer.”

Most influential person in his life: “My wife is my anchor and keeps me in perspective.”

TAKING KIDS ALONG FOR THE RIDE

Sal Cannizzaro, CEO of Immediate Care Medical Walk-In of New Jersey, will be hosting the 5th Annual Kids Fishing Trip on Monday, August 19 out of Atlantic Highlands on the Mi-Jo. Sponsored by Immediate Care, in support of community organizations including Father Time, the RAINE Foundation, Big Brothers Big Sisters of Monmouth & Middlesex Counties and The Frances Foundation, about 60 children and adults will get to enjoy a fun day of fishing on the 75-foot charter boat. Immediate Care also received great support this year from Hope For Children Foundation.

“This is one of my favorite days of the year,” said Sal, who is passionate about giving back to the community. “I’m grateful for all of our partners and sponsors that make this event possible and help it to grow year after year.”

In addition to enjoying a fun day of fishing on the boat, the kids who catch the biggest fish will receive first, second, and third place prizes donated by Mangia Brick Oven Pizza of Shrewsbury.

See this article in PRINT: